Home > Stories > When am I to see my books?
IN THIS SECTION

When am I to see my books? 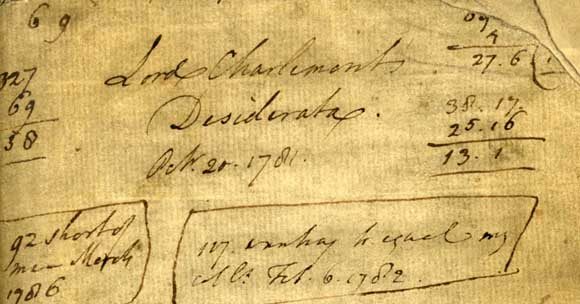 This plea was voiced by Lord Charlemont in a letter to his friend Edmund Malone on 2nd January 1781. Lord Charlemont was an avid collector of books, art and antiquities. He furnished his house at Rutland Square (Parnell Square) with purchases from his extensive travels around Italy and the Mediterranean during the mid 1700s. Now home to Dublin City Gallery The Hugh Lane, Charlemont House once boasted three well stocked libraries, a medals and antiquities room. A patron and lover of the arts, Charlemont was a founder member of the Royal Irish Academy. Edmund Malone was one of the 38 original members who attended the first meeting on 18th April 1785 at Charlemont House.

Malone, who lived in London, was an Irish Shakespearean scholar and editor of the works of William Shakespeare. The Gilbert Collection of Dublin City Public Libraries includes a manuscript entitled ‘List of the Plays in Lord Charlemont’s possession’ handwritten by Edmund Malone. Undated, Malone’s manuscript notebook contains a brief alphabetical catalogue of more than 170 plays in Charlemont’s Library including work by Shakespeare and Dyden, Otway, D’Urfey and Caryll. Charlemont was particularly interested in acquiring drama from the 1670s to 1690s, and Malone’s notes include a list of Charlemont’s desiderata or items wanted, dated 20th October 1781.

The letters and Malone’s manuscript together show Lord Charlemont’s fervour for books. Although he discusses politics and events of the day, his purchases are never far from his thoughts: ‘The sooner you can send my books the better.’ (29th June 1781) 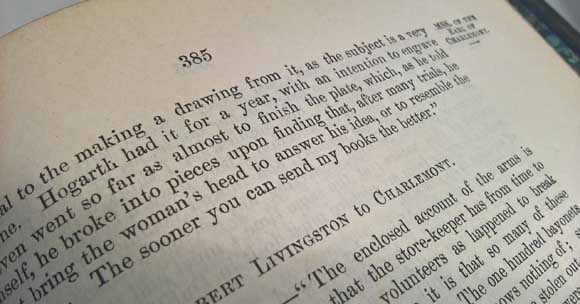 Malone’s notebook is annotated with his purchases from sales in London. He remarks to Charlemont on 18th February 1786 that ‘he has kept a very exact list of all the plays I sent you, so you will not be in danger of receiving duplicates.’

Charlemont shows his appreciation for Malone’s efforts in their correspondence ‘Your acquisition for me is magnificent, and what is better that magnificence, though seldom allied with it, extremely cheap; you are certainly the best book- jockey that ever existed. I long to see my new old treasure, and expect it daily.’ (1st November 1786).

Charlemont’s circle included book collectors and antiquarians such as his neighbour Andrew Caldwell of Cavendish Row. Together they had many sources for books including Henry Beman in Rotterdam and booksellers such as Valance and Ladell in London. In his letters Malone described his purchases for Charlemont and his spending at the auctions of Edward Wynne’s library (8l. 14s.), Dr. Richard Wright’s library (13l. 6s.) and the dramatic library of John Henderson (10l 8s 6d) in 1786.

Lord Charlemont’s financial situation came to impact on his collecting in later years. On 19th August 1797, he wrote to Malone … ‘no man, a few rich harpies only excepted, has wherewithal even to supply his common and necessary mode of living; for which most excellent reason I must, however unwillingly, beg of you, for the present, to suspend your kind endeavours to increase my collection, to which abstinence from the favourite food of my mind you may be assured that my poverty and not my will consents.’

Charlemont died two years later, leaving his estate in financial difficulties. His remarkable library was brought to auction by the 3rd Earl in July 1865, but a fire at the auctioneer’s premises destroyed some of the collection, with more suffering water damage. The remaining items were sold in September 1865.

The City Library at Parnell Square will bring a Storyhouse of contemporary literary collections to Parnell Square, showcasing Dublin’s unique literary heritage and offering reading and creative spaces, performances and opportunities for residencies.