Home > Project Information > Statement by the Chief Executive, Owen Keegan
IN THIS SECTION 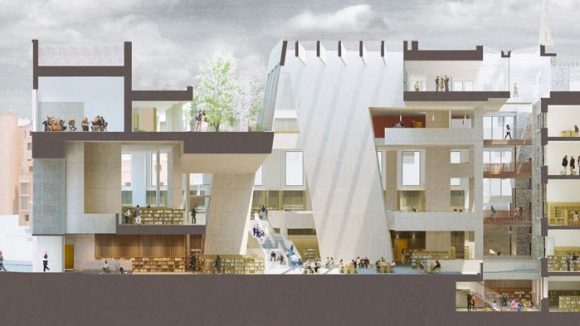 Dublin City Council has been pursuing the development of a new Cultural Quarter at Parnell Square West since 2012. The proposed development comprises a new city library and a range of cultural facilities, including a music centre, a design space, an innovation hub, a business library, a 200-seater conference space, education centre, a café and an exhibition area.  The proposed development also includes the redevelopment of the Georgian houses at No 20 to No 28 Parnell Square West, and a new public plaza created in front of the City Library buildings and Dublin City Gallery, The Hugh Lane.

The Parnell Square Cultural Quarter is a major flagship development for Dublin city, which will play a key role in the regeneration of the north inner city, as well as providing a new focus and destination at the northern end of O’Connell Street.

The City Council has now been advised, following work undertaken by a consultant engaged by the Foundation, that the required private fundraising could take over 3 years and that there is no guarantee it will be successful. The Foundation’s consultant identified a number of obstacles to a successful private fundraising campaign for the project including the following:

(The City Council’s representatives on the Foundation, while noting the conclusions in the consultant’s interim report did not accept that the obstacles were necessarily insurmountable.)

The consultant recommended a number of options but the one that has the support of the Foundation is to split the project between the library element, which would be funded by the City Council and cultural elements, which the Foundation would seek to fund.

The Chief Executive of the City Council wrote today to Elected Members to appraise them of these developments which he described as ‘most disappointing and unwelcome’. In view of the importance of the Parnell Square Cultural Quarter development to the cultural life of the city and to the redevelopment of the north inner city he stated his view that every effort should be made to ensure the project proceeds. It is also important that there is no further loss of momentum on the project.

He advised the Elected Members that he is currently examining a staged approach to the delivery of the project. This would involve the City Council proceeding with the construction of the new library building and the possible deferral of both the planned works to the Georgian houses, with the exception of works required to access the new building and certain protective works, and the deferral of the public realm works. The estimated cost of the new library building and associated works is €80m. The intention would be to complete the work to the Georgian houses and the plaza at a later stage. He advised the Elected Members that he was proposing to proceed as follows: