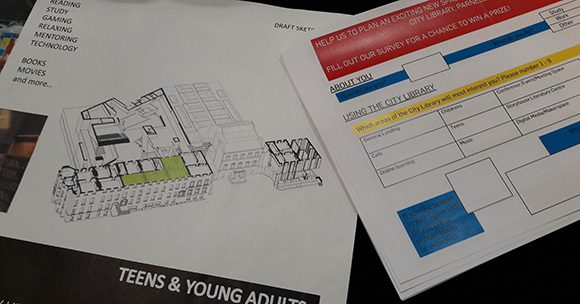 Margaret Hayes, Dublin City Librarian and Owen O’Doherty, Deputy City Architect presented visual aspects of the Parnell Square Cultural Quarter project which focused on the location of services on the various floors of the planned City Library e.g. children and young adults’ section, innovation hub, music centre and outlined the seven high level themes and concepts that have guided the development process from idea and vision to sketch design.

The ambition is to create a City Library for the people of Dublin, a place to learn, create and participate, and a space to inspire and excite, welcome and include.

Dublin City Public Libraries took part in Zeminar at the RDS on 11th and 13th October. This event was attended by teenagers from schools around the country. As part of the ongoing consultation and engagement process, the Parnell Square Cultural Quarter team presented plans for the new City Library and also took the opportunity to carry out a survey on future services for teenagers in the library.  The team asked for feedback about the proposed teen space in the City Library – what age group will use it, how it should look and feel and what would encourage teens to use the library in the future. The results of the survey will have a direct influence on the design of the future teen space and service provision in the City Library.