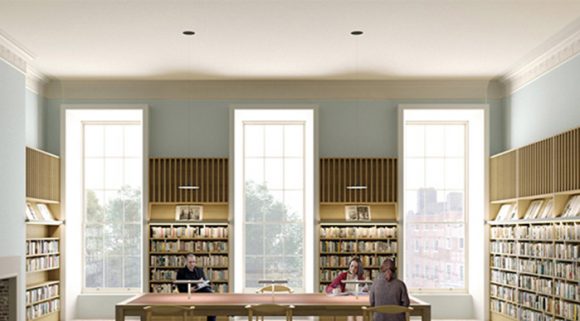 Detailed plans for Parnell Square Cultural Quarter, which will be anchored by a new City Library, were presented in City Hall, today, Monday 10 September. The design team, led by Grafton Architects and Shaffrey Architects, is currently finalising the planning application which will be lodged with An Bord Pleanala for consideration in the coming weeks.

The project to deliver a new cultural landmark for Dublin is being undertaken by Parnell Square Foundation, a charitable trust established by Kennedy Wilson with the support of Dublin City Council. The Foundation has been set up to raise funds and finance the project which is being developed by its wholly owned subsidiary company PSQ Developments Limited. A funding model has been agreed which will see a minimum of 55% of the project funded by philanthropy. Dublin City Council will fund a maximum of 45% of the project cost.

Quarter will be anchored by a new City Library

This major 11,000 square metre project will see a new City Library and a variety of cultural uses located in a terrace of six restored Georgian houses at 23-28 Parnell Square and a dramatic new building to be constructed to the rear. As part of the overall plan, the Georgian houses at No 20 and No 21 Parnell Square will also be redeveloped and a new public plaza created in front of the City Library buildings and Dublin City Gallery The Hugh Lane. See design images in our Gallery.

The new City Library, which will replace and reimagine the current Central Library, will create an exciting new destination for learning, literature, information and culture. Located beside Dublin City Gallery The Hugh Lane and very close to the Irish Writers’ Centre, the Dublin Writers Museum, the Gate Theatre, Poetry Ireland and the Garden of Remembrance, it is envisaged that the Library will create a focal point for Parnell Square Cultural Quarter.

The Lord Mayor of Dublin Nial Ring noted that the project will have a positive socio-economic impact on the immediate area of the North Inner City and on Dublin’s city centre. “Parnell Square is the first and finest of Dublin’s Georgian Squares; it has a rich and important history with philanthropic origins. Welcoming an estimated 3,000 visitors each day, up to one million people per year, this bold and visionary project will act as a catalyst for regeneration in this part of the City, drawing Dubliners and visitors of all ages in new directions and creating new business opportunities.”

As part of the Parnell Square Cultural Quarter, the Library, in addition to developing a contemporary library space will also have a range of cultural facilities, including a music centre, a design space, an innovation hub and business library, a conference space, an education centre, a café and exhibition areas. 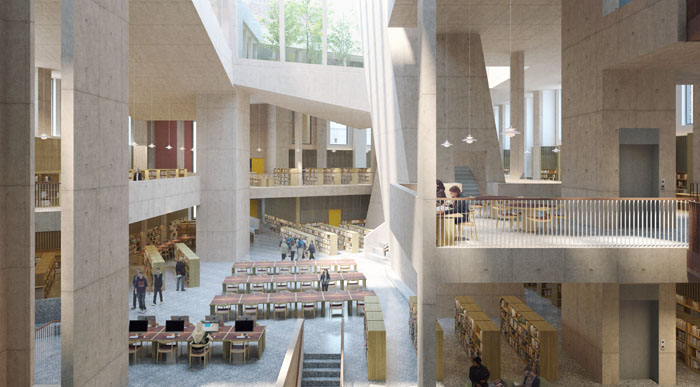 Speaking at the launch of the plans, City Architect Ali Grehan said that the project was designed to make the Parnell Square Cultural Quarter a landmark destination that will revitalise Dublin’s historic Civic Spine. “The Public Library and Cultural Quarter will be a magnificent synthesis of historic and contemporary architecture unique to Dublin, drawing people along the pivotal route that connects Christchurch and Dublin Castle, through College Green and O’Connell Street, to Parnell Square,” she said.

Brendan Teeling, City Librarian (Acting) said: “The proposed design for the new City Library was shaped following extensive consultation with the public and stakeholders. Our objective is to create a world class library that serves local and civic communities and is consistent with the status of our capital city and our UNESCO City of Literature designation. It will inspire and excite, welcome and include, with collections, connections, places, services and programmes for learners, readers, researchers, children and families, and all citizens. It will be a place to learn, create and participate.”

Yvonne Farrell, representing the design team of Grafton Architects and Shaffrey Architects, said: “For Grafton Architects and Shaffrey Architects, this project celebrates the real value of city. It provides a new south-facing public space; it renews wonderful 18th Century houses with their beautifully proportioned rooms and it creates a memorable 21st century addition, weaving the historic and the contemporary together in an exciting way.”

Peter Collins, President, Kennedy Wilson Europe, said: “We have seen globally how major philanthropic projects can not only provide significant educational and cultural benefits to a city’s citizens but also act as a catalyst for the regeneration of whole areas. Parnell Square Cultural Quarter is a world class project and will have huge benefits for the people of Dublin and visitors alike.”

Subject to planning permission, and the procurement of contractors, it is anticipated that the construction and commissioning stage of the new City Library project will take two to three years.

Watch a short video to mark the milestone achieved for Parnell Square Cultural Quarter, as the planning application is finalised.