Home > Stories > Licence for sedan chairs
IN THIS SECTION 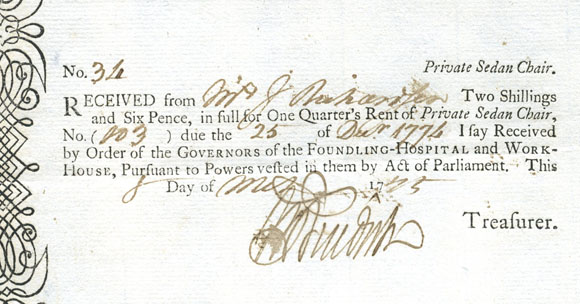 In 1748 Dr. Bartholomew Mosse leased four acres and one rood on the north side of Great Britain Street to erect a new maternity hospital, today’s Rotunda Hospital. He had opened a hospital in George’s Lane in 1745, but this new Lying-in Hospital would be on a much larger scale. The main initial source of funding for the hospital was provided by the ‘New Gardens’, with orchestra, bowling green and other amusements.

Another measure to fund the hospital was a tax on sedan chairs granted by an Act of Parliament, in 1785. A sedan chair was a chair or cabin carried on poles by at least two porters, providing a mode of transport through the streets. Of the 1787 list of proprietors of licences on private sedan chairs, thirty one had addresses at Rutland Square, exceeding the twenty four at St. Stephen’s Green, showing the social standing of the Square at that time.