Home > About The Project > The Buildings 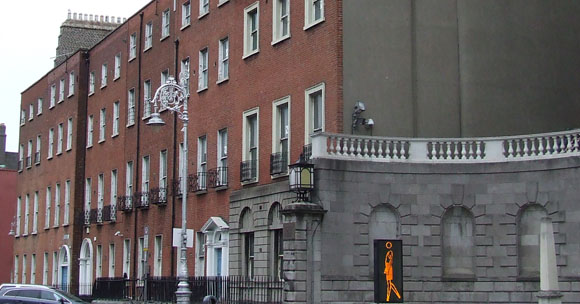 Parnell Square Cultural Quarter will be anchored by a cluster of new cultural facilities with the City Library at its heart. These will be accommodated at numbers 23- 28 Parnell Square, the site of the former Coláiste Mhuire, and at numbers 20-21 Parnell Square which lie on either side of Dublin City Gallery The Hugh Lane.
Parnell Square is the earliest of Dublin’s Georgian Square with houses of greater size and quality than the later squares. It is, therefore, highly significant in the context of eighteenth-century Dublin where clients and designers of highest order were involved in its building. The north side of Parnell Square has a designed terrace elevation or palace front, with Charlemont House at its centre. Originally called Palace Row, it is the only terrace of this type in Dublin – other palace fronts were planned but not executed.
Numbers 23 to 26, the six houses that make up the terrace to the west of Charlemont House were constructed between 1763 and 1764; numbers 20 and 21, the two houses to the east side, were constructed c.1765. These buildings are fine examples of Georgian town house architecture of the period. The houses on either side of Charlemont House are unusual by Dublin standards in having rusticated and arcaded stone-faced ground floors and granite cornices below the attic windows. These features echo the hall floor and round-headed niches of the William Chambers designed Charlemont House.
The original authentic structure of these eighteenth-century town houses largely survives in walls, vaulting and floors. Good to very good quality internal plasterwork and joinery survives from the mid-eighteenth century alongside good quality nineteenth-century interventions and alterations. In the twentieth century Coláiste Mhuire gradually acquired numbers. 23 to 28 with consequent interconnection and loss of some building fabric. Similarly numbers 20 and 21 are interconnected at all levels for their last use as office accommodation.