Home > About The Project > Project Partners 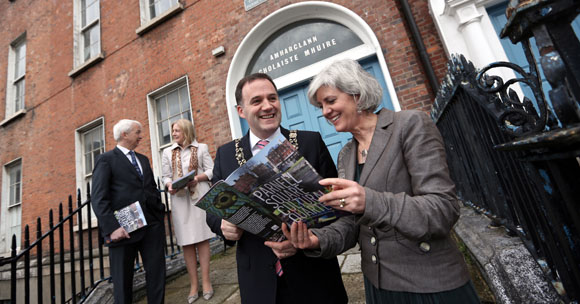 Dublin in the 21st century is a city of over half a million people, boasting a rich and diverse cultural life. Dublin City Council is the largest local authority in Ireland, providing a wide range of information and services to a population of over 500,000 in its administrative area, and to a greater populace beyond. Services include business, community, housing, recreation and culture, planning, roads and transport, water and waste services. The Culture, Recreation and Amenity Department of Dublin City Council works to deliver cultural services in Dublin including libraries, parks, sports and leisure facilities.

Working with private funding partners, as well as Dublin City Council Councillors, colleagues and other agencies, the Parnell Square Cultural Quarter Project partners propose to develop a network of cultural facilities centred on a revitalised Parnell Square aimed at making it an ‘anchor’ destination, catalysing the district’s regeneration. A new City Library will be the anchor of this development.

The delivery of a 21st century City Library for the citizens of Dublin is one of the key civic infrastructural objectives for the capital city, identified in many key corporate policy documents and highlighted in the city’s successful bid for designation as a UNESCO City of Literature. The City Library will replace the current Central Library and will serve the 1.2 million population of the Greater Dublin Area, attracting an estimated 3,000 visitors a day.

Read more about Dublin City Council on our website www.dublincity.ie

“Parnell Square has a long association with philanthropy; the Rotunda Maternity Hospital, Britain and Ireland’s first public maternity hospital, built by Dr. Bartholomew Mosse in the 18th century was financed by private donations. Kennedy Wilson is proud to continue this philanthropic heritage through our involvement with this visionary development for Dublin city. As a company we are committed to supporting public projects in the cities in which we are based, that will have a genuine positive impact on the residents of those cities. In addition to providing the seed capital for the project, Kennedy Wilson will be leading the further fund raising effort to secure the finances to deliver this exciting initiative and to help manage the project throughout its development. Kennedy Wilson is committed to providing a lasting legacy for the people of Dublin, and we are delighted to be partnering with the City in the creation of a new cultural district for Dublin City.”

Founded in 1977, Kennedy Wilson is an international real estate investment and services company headquartered in Beverly Hills, CA with 24 offices in the U.S., U.K., Ireland, Spain and Japan. The company offers a comprehensive array of real estate services including auction, conventional sales, property services, and research and investment management. Through its fund management and separate account businesses, Kennedy Wilson is a strategic investor of real estate investments in the U.S., Europe and Japan. For further information on Kennedy Wilson, please visit www.kennedywilson.com

The Office of Public Works is a state agency of the Department of Finance, with responsibility for management of state property and buildings throughout the country. Arrangements are being made for the transfer of the former Coláiste Mhuire buildings from the OPW to Dublin City Council to provide a City Library for Dublin at Parnell square Cultural Quarter. Visit their website at www.opw.ie